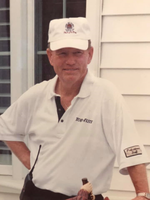 Dennis R. Milne 77, formerly of Yardley, PA, died peacefully in his Palm Beach Gardens home on February 3rd, 2020. Born in Trenton, NJ, he was the son of the late Eleanor (Wicks) and George R. Milne. He is survived by his wife Bobbi Schlager Milne, his daughter Tracy Milne Edgemon, wife of Acey Edgemon, Jr., granddaughters Ava and Karina Edgemon, his sister Nancy Haldeman, his brother in law Eric Schlager, his nephew Todd Haldeman and family, along with numerous nieces, nephews and cousins. Dennis was predeceased by his son, Andrew G. Milne. Dennis graduated from Pennsbury High School where he played on the varsity soccer team as well as the varsity golf team. He then attended Wake Forest University on a full golf scholarship. Among many accomplishments at Wake Forest, Dennis won the ACC Individual Golf Championship as well as the Team Championship. Upon graduation in 1965, Dennis became the Assistant Golf Professional at Trenton Country Club under his father George R. Milne and was the Head Golf Professional from 1973 to 2006. For 65 years from 1941 to 2006, George and Dennis served the members of TCC tirelessly. Dennis' career as a PGA Golf Professional was quite extensive and successful. He was a member of the PGA Philadelphia Section where he won numerous individual and partner tournaments. As a teacher of the game, he started his juniors at the age of four so by the time they were fourteen they were playing 18 holes and beating most of the adults. During Dennis' tenure, this junior program, which was started in 1941 by his father George, was awarded the National Award for the Best Junior Program at a Private Country Club. Dennis also won an award recognizing him as one of the top 100 Best Golf Instructors in the Country. There will be a Celebration of Life for Dennis to be held at Trenton Country Club, 201 Sullivan Way, Trenton, NJ on Thursday, February 13, 2020 at 5 pm. TCC Members, all friends and family are invited to attend. In lieu of flowers, donations may be made in Denny's memory to: The Andrew G. Milne Scholarship Fund, c/o Paul Kennedy 499 Deacon Blvd, Winston-Salem, NC 27105.