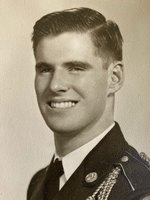 Robert W. Slatoff of Washington Crossing, PA died on October 14, 2020 at the Chandler Hospice in Newtown, PA. He was 82.

Born in Trenton, NJ, son of the late Lester M. and Doris Johns Slatoff, he was a longtime resident of Lower Makefield Township before moving to Washington Crossing two years ago.

Robert was a graduate of Bordentown Military Institute and Lafayette College.

He joined his family’s firm, Lester & Robert Slatoff, Inc., which was well known and highly regarded in the conducting of auctions in New Jersey and Bucks County. Robert remained in this business until his retirement. Besides enjoying skiing and sailing, he enthusiastically participated in a singing group of Lafayette alumni known as “The Graduates” which performed at numerous Lafayette functions throughout the years.

Father of the late Jefferson Dean Slatoff, he is survived by his wife, Sharon Still Slatoff; his son and daughter-in-law, Karl and Yvette Slatoff of New Canaan, CT; his daughter and son-in-law, Jennifer and Sean Wagner of Lower Makefield Twp., PA, and six grandchildren, Emma and John Wagner, Vaughn and Evelyn Slatoff, and Nicholas and Tyler Slatoff and their mother Heather Slatoff.

A private family service will be held.