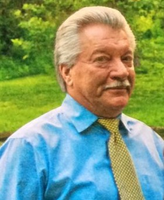 Stephen I. Reilly Stephen I. Reilly of Levittown, PA passed away suddenly on Tuesday October 20, 2020 at his home. Stephen was 67 years old. Stephen is the husband of Lisa Reilly (Garrett). Born in Abington, PA, he was the son of the late Ira G. Reilly and Arlene Fay Reilly. He has resided in Montgomery and Bucks County all of his life, spending time in Warminster, Glenside and Levittown. He was a Philadelphia sports fan especially the Eagles. Stephen was in sales for most of his adult life, most recently at Lowe's Home Improvement. In his retirement, he was able to volunteer his time to deliver meals for the Meals On Wheels county service. His favorite pastime was spending time with his grandchildren and dog Fiona. Stephen loved being with people. Each of his family and friends, undoubtedly, have special memories together. Stephen was simply - ONE of a KIND – the world lost a great father/brother/friend and most importantly, a KIND heart. In addition to his wife Stephen is survived by his children Stephen I. Reilly II, Michael K. Reilly and Summer M. Sedano. He was the brother of Susan Thomlinson. He is also survived by his grandchildren Emma, Shane, Brendan and Noelle. Funeral services will be on Thursday, October 29th at The Episcopal Church of the Incarnation. 1505 Makefield Road, Morrisville, Pa. 19067 http://www.incarnationepiscopal.org/ Call: 10am to 11am, Service: 11am to 12pm **This service will most likely be held outside, if weather permits, to accommodate the maximum number of people. Please consider possibly bringing a chair. We are following the sensible Social Distancing guidelines. In lieu of flowers, memorial contributions may be made to Alzheimer's Foundation. https://alzfdn.org