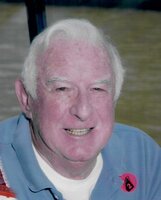 Born in Wilburtha, NJ, he was the son of the late Joseph and Anna Kovitch Sheridan.

During WW II, Jim enlisted in the Coast Guard and was detailed to the US Navy Warship USS General Richardson for active service in the European Theater. He was a proud veteran who settled in Lower Makefield in 1946 and began a lifelong career in fire and building safety with Warren Balderson & Co., J.W. Kennedy & Sons and with his own company, Sheridan Fire & Security of Yardley. Jim took a civilian position as a Safety Officer with the Naval Air Propulsion Center in Ewing, NJ until the base was closed and then finished his career with Lower Makefield Township in grounds maintenance. He was a loyal, lifelong member of the Yardley-Makefield Fire Company and was known for his cheery and helpful attitude. Jim was a huge fan of his beloved cat “Callie”.

Husband of the late Jean Melton Sheridan and father of the late Victoria Paul, he is survived by his daughter and son-in-law, Nancy E. and Karl Hagemann of Washington Crossing, PA.

A private family service will be held with interment at St. Ignatius Cemetery.