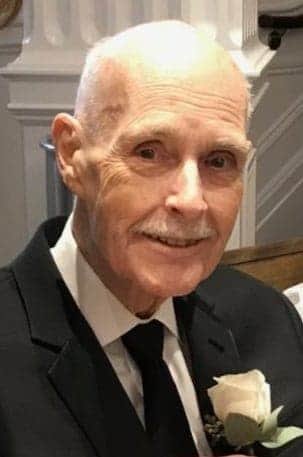 George Joseph Weihs of Washington Crossing, PA passed away on Monday July 20, 2020 at St. Mary Medical Center in Langhorne, PA, surrounded by his loving family. He was 91.

George left college at the Pratt Institute during the Korean War to serve in the US Army. After his Honorable Discharge, he became a lifelong member of the Catholic War Veterans, serving with distinction in many leadership capacities. He was NY State Commander and received the CWV’s highest honor, the Saint Sebastian Medal.

George had a long and successful career as a corporate executive, principally for Union Carbide Corporation, in the chemical industry. He was a member of the Chemical Society, the Toastmaster’s Club, and the Squadron A Club.

George and his wife, Margaret, raised their three children in Middle Village, NY with devotion and enthusiasm. He was very active in St. Margaret’s Church as Head Usher and a member of the Holy Name Society. George became just as devoted to St. George’s Parish in Titusville when he moved to Washington Crossing.

George was the most wonderful husband, father, grandfather and friend. He lived his life with integrity, purpose and a deep love for his family. He treated everyone with dignity and respect, was the “go-to” guy for family and friends, and combined a sharp mind with an even sharper wit. He is survived by his wife, Margaret Rodgers Weihs; son and daughter-in-law George P. and Mary Weihs of Doylestown, PA; two daughters and sons-in-law, Kathleen and Anthony Scotto of Washington Crossing, PA, and Susan and Ian Darlington of Merrick, NY; four grandchildren, Brian (Ashley) Scotto, Megan (Collin) Sullivan, Kenneth and Thomas Darlington, and one great grandchild, Hudson Scotto.

Share Your Memory of
George
Upload Your Memory View All Memories
Be the first to upload a memory!
Share A Memory
Send Flowers