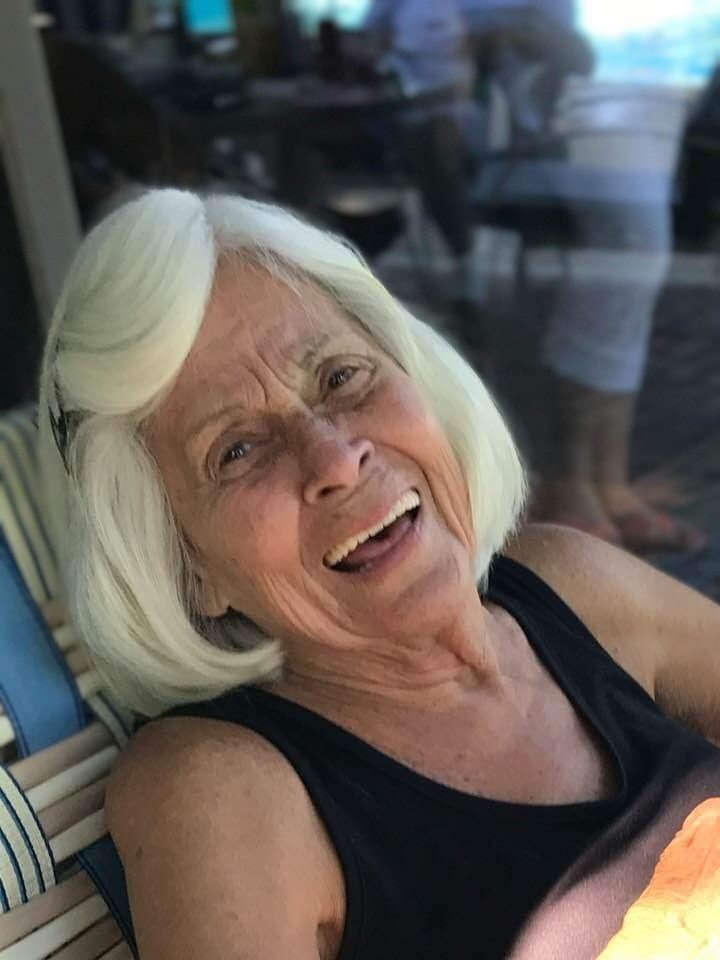 Geraldine, known to many as, “Gerry” passed away, peacefully in her home on Mt Eyre Road, Washington Crossing, PA on November 25, 2020. She was eighty- six years young! She is survived by her only sister, Hilda Webster, Roslyn, Pa. Her nephews, Danial Webster, Dave Thomas, and niece Karen Thomas.

They met in middle school and reconnected during their high school years. David, a star football player and she a cheer leader.  They courted while Gerry attended college. He was and always will be her one and only “Mick”.

Together they raised five loving sons. She was the most amazing wife, mother and woman! Always kind, gentle, creative, athletic, social, but mostly she was the “matriarch” of her large, beautiful family.  She will be greatly missed by all of her children, their wives and families. Michael David and Nina Kay Bray, formerly from Doylestown, Pa. Kenneth Gregory and Eileen Mary Bray, of Buckingham, PA. James Brian and Lorraine Bray, of Bristol, Pa. Robert Lee and Stephanie Ann Bray, of Newtown., Pa and Randy Scott and Nicole Marie Bray, of Levittown, Pa.

We are happy she got to know her three great grandchildren, and she was happily looking forward to the fourth baby coming soon.  Daniel Jared, Aryana Nichole Connor and Elliot Ryan Bray.

Born July 27, 1934 in the living room of her parent’s home, on 17 Bell Ave, Yardley, Pa. She was the loving daughter of the late, Malcom and Emily Carver. She grew up with her sister, Hilda Carver in the town of Yardley, and was known by many.

She loved ice skating on Afton Pond and sleigh riding down the steep hill on College Ave crossing main street (with a crossing guard for safety), in the winter months. She played field hockey, basketball, softball and was captain of all teams as well as the cheerleading squad for Pennsbury High School.  She graduated from Pennsbury High School in 1952 and continued her education at West Chester with a bachelor’s degree in Physical Education in 1956.

David and she were married on August fourth, 1956, in the old Yardley Methodist Church, which was located on Main Street, Yardley.

Together they built their one and only family home on Mt Eyre Rd, Washington Crossing, Pa.

Gerry and Mick loved to take their kids camping in their home-made pop up camper. They camped all over New England, and fond memories were made.

Every August Gerry and Mick would drive to Woods Hole, MA, take the car ferry to Martha’s Vineyard, where they would celebrate their anniversary on all the beaches. Their favorite beach was Menemsha. They enjoyed eating lobster on the beach and biking the entire island. This was a trip they looked forward to every year for over thirty years.

Gerry was inducted into Pennsbury Athletic Hall of Fame in 2001 for her athletic abilities. She enjoyed all sports, but especially field hockey, both as captain and then coaching in her later years.

She loved arts and crafts. She was always making someone a beautiful quilted photo album for either wedding or baby showers.  She enjoyed entertaining at their home, especially pool side. The Bray Home was home to many a teenager. When entering, one was always treated with respect, well fed and welcomed with loving arms! She was “Mom Bray “to more than just her five boys, indeed!

Her life will always be honored, and remembered, for the great woman that she was.

Friends are invited to call on Friday, December 4, 2020 at FitzGerald-Sommer Funeral Home, 17 S. Delaware Avenue, Yardley, Pa from 3:00pm – 6:00 pm. There will be a limit of ten people allowed inside at one time. Graveside ceremony will be held Saturday Dec 5, 2020 at 11:00am at the Newtown Cemetery, Newtown, PA, which will be live streamed via Zoom.  The login information for the Zoom meeting is: Gerry Bray Graveside Service, passcode: H9ECt2.

In lieu of flowers, the family is requesting a small donation to the Alzheimer Association Delaware Valley Chapter, 399 Market Street, Philadelphia, PA 19106, ALZ.org. Please check that this gift is a tribute gift, in honor of Geraldine J. Bray.